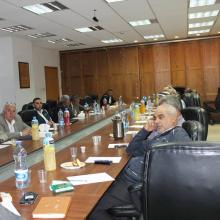 Al Reef Fair Trade held its annual meeting with organic and extra virgin olive oil producing cooperatives to discuss the available quantities and fair prices of olive oil for this season, in addition to the problems and challenges facing the olive sector. The meeting also included the participation of agricultural expert Eng. Sadek Odeh; to discuss and raise awareness on the most pressing challenges facing olive trees, which is climate change, drought, agricultural pests and methods to combat them.

Agricultural expert Eng. Sadek Odeh explained in details the phenomenon of climate change and its impact on the changes that are happening to the olive tree in terms of production and quality as the climate change is the main reason for these problems. For example, the amount of rainfall are not equally distributed throughout the year, also the intensity of rainfall has become different; before the rainfall was in the form of spray, but now it rains heavily and this cause the soil not to saturate with water as water continue running down the valleys. These climate changes also represented by continues increase of temperatures which cause the dry of branches, leaves and fruits of olives, which in return affect both taste and quality, such as the emergence of Al kerkee taste in oil (sensory specifications). Moreover, higher temperatures reduce the moisture content in the soil due to evaporation and increased acidity levels in olive oil were found despite the early process of picking.

Eng. Sadek Odeh recommended the importance of combating olive leaf fly pest, which has become a primary pest that must be stopped before spreading inside the west bank. These kinds of pests are spread mostly in the areas near the Green Line because Israeli sprays these pests with planes causing their escape to nearby areas. Eng. Sadek Odeh stressed the need for supplementary irrigation as strong solution to maintain the moisture of olive trees, unjust pruning of trees at the appropriate dates, the use of organic traps under trees and adding white soil under trees soil to reduce evaporation from the soil.

Eng. Hakam Salawdeh – from the Quality Assurance Department at Al Reef company illustrated the plan for sample extractions to cooperatives through an illustrative table, which geographically will begin from Jenin area; a sample from each tank in each cooperative will be taken and sent to Al Reef laboratories and the samples that pass Laboratory tests at Al Reef will be sent to a neutral laboratory for further analysis.

The meeting included also a thorough discussion with cooperatives on consumer’s purchasing power in Europe and the decline in the euro value against shekel to reach a fair price for both Palestinian small scale farmers and consumers in international markets, especially Europe based on the correspondences between Al Reef and its partners on the difficulty of increasing prices for this olive oil season. Saleem Abu Ghazaleh – the General Manager at Al Reef – explained that the company will do its best to stabilize prices as the last season and things will be clearer after studying some variables, including the local market prices, the prices paid by other Palestinian Fair Trade Organizations, buying conditions of Al Reef external partners. Prices of olive oil cooperatives will be determined at the beginning of next week.